Educational background: Primary and secondary only

History of my Amputation

I got my amputation during the rebel war in Sierra Leone; during the war I lost my education and also lost my entire family and very important people in the society. August 1996 I got my amputation wen the rebels forces attacked our displace camp at ghundama village and they killed so Meany peoples they were saying peace before election, they killed, loathed, raped and destroyed the entire camp they captured me and tied me servilely and putted my lift foot on a stick bar and used a big merchet they got my left foot and lift me there with pains and I suffer so much in the bush for two (2) months in the bush I went to a town where I was rescued by the red cross and I was hospitalized in Bo government hospital by MSF. After I discharged from the hospital I decided to stay with my causing but due to poor living conditions I moved to the capital city were by chance I joined the fling stars amputee football club no support from the government of sierra Leone life is very difficult in Sierra Leone. Please, we need help.

But with the hope of the Salone Flying Stars Amputee Football Club I have the second chance to live. 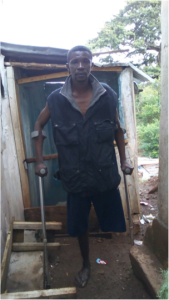